PHOTOS: Cushing and Capture the Sun

Last night, when talking to a friend, we uttered a sentence that may never have been spoken before:

“I’m going to see an instrumental prog-metal band at a bowling alley.”

Capture the Sun delivered on that promise last night at Bayside Bowl, playing the venue’s final outdoor show of the season with Cushing and Purse. CtS will play Geno’s on Sept. 18th with Superorder and Sylvia.

Speaking of Sylvia, the band is apparently emerging from its hiatus, because yesterday they announced another show and it’s a pretty big deal. On October 7, the band will play Geno’s with Today is the Day, Lord Mantis and Rozamov.

This is some exciting shit.

Don’t forget to catch Dead by Now’s farewell show at 9 tonight at Flask Lounge with Swarmlord and Big Meat Hammer. The show is free. 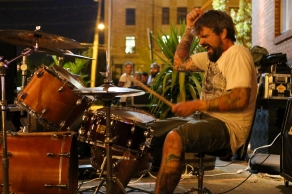 Cushing drummer Ric Loyd at Bayside Bowl. Also, check out the dudes in the background. 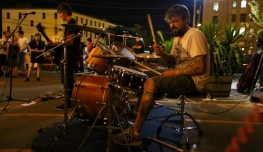 This entry was posted on September 6, 2014 by bmccanna in Bayside Bowl, Capture the Sun, Concert photography, Cushing, Shows, Sylvia.