PHOTOS: Dead by Now and Swarmlord

Well, we’re speechless … mostly due to hoarseness from near-constant shouting last night during a performances by Swarmlord and Dead by Now.

Somewhere within Flask Lounge, we lost our voice, hearing and minds.

We also lost Dead by Now.

If there’s an award for Most Photogenic Person in the Portland Heavy Scene, it goes to this guy. Zak Haab is never not interesting. I’ve got dozens of shots of Haab and they’re all gold, mostly because he knows heavy music can only be improved through theatricality. Here, his eyes roll back into his head during the final performance of Dead By Now. (I’ve said it before and I’ll say it again: God damn, I miss that band.)

Couple Dylan Hamel and Andrea Gordon during a set by Swarmlord at Flask Lounge.

Michael Anderson during the final performance of Dead by Now at Flask Lounge. God damn, I miss that band. 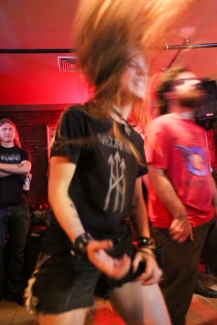 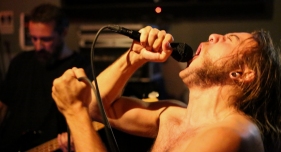 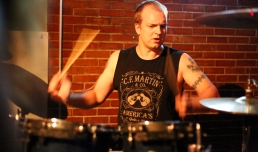 This guy was literally getting down to Swarmlord at Flask Lounge.

Swarmlord drummer Adam Cogswell at Flask Lounge. My favorite part of this image is Cogswell’s mustache. They way it sneaks out over the dartboard frame makes the photo seem like a pop-out book.