If you’re like us, you enjoy the spectacle of Tron but cringe at its lackluster storytelling.

Portland prog-metal band Superorder has solved this problem by offering a stunning, Tron-worthy, DIY light show without any encumbrances of plot. The soundtrack is epic, too. If this band sells season tickets, we’re buying. You should definitely check them out.

Last night, Superorder joined Sylvia, Capture the Sun and Dour at Geno’s for a fundraiser toward Grime Studios’ plans to move to a new location. The event raised $570 toward the $10,000 goal for Phase 1 of the campaign, according to Grime owner Justin Curtsinger. If the goal is met in the next 27 days, a second phase will begin in early November. In all, Curtsinger hopes to raise $70,000 to build-out the new space. About half of that could come in the form of a non-traditional loan.

Sylvia will be playing Geno’s again next month with Today is the Day, Lord Mantis and Rozamov. To which we say, fuck yes. 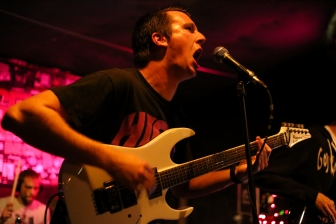 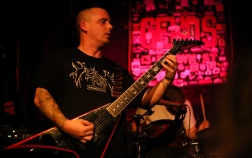 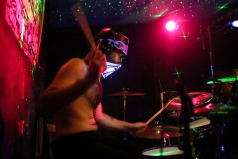 One comment on “PHOTOS: Grime benefit show with Sylvia, Superorder and CtS”