Nashville invades Port City Music Hall tonight, but not without some local noise.

Nashville’s Jeff the Brotherhood, a duo comprised of brothers (neither of whom are named Jeff), are in the midst of a 23-city coast-to-coast tour in support of their upcoming EP “Dig the Classics” — a covers album featuring songs by Beck, the Pixies and My Bloody Valentine. They’re joined on this leg by fellow Nashvillians Diarrhea Planet, a six-piece featuring — no joke — four guitarists. 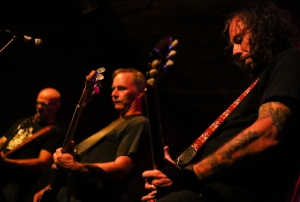 Murcielago is entering a busy season. Next month, they will release their debut LP “S/T” on their own label. In early December, they will play a CD release party with Eldemur Krimm, Dominic and the Lucid and ShaShaSha. (The show also doubles as a birthday bash for lovely local legend Holly Nunan, who chose the lineup, and band members Brian Chaloux and Ian Ross.)

“Party hats for everyone,” said Neil Collins, Murcielago’s singer and bassist. “I feel bad for anyone else planning a show that night.”

“S/T” was originally planned for release by Detroit label Small Stone, but a well-publicized flood in August called for improvisation.

“We are doing this album as a self release on our label ICUS records, due to the distribution nightmares and the flood at Small Stone. It would have put us releasing next summer, and we really want this out,” Collins said. “Bull Moose will have it exclusively for a little while, then it will go up digitally and at Newbury Comics, with overseas and national distribution handled by a company in Boston. Small Stone will release our next record, which we will start in on in early winter.”

Collins said there are no immediate plans for a tour “beyond weekend warrior stuff.”

“[We’re] always open to offers or show trades,” he added.

Collins said the band is thrilled to share the stage with Jeff the Brotherhood and Diarrhea Planet.

“It seems like fuzzy, scuzzy rock is on the rise. I like their sounds, lots of subtle Blue Cheer nods in there,” he said. “Burn all the banjos, as far as I’m concerned. Bring on ‘Sky Valley.'”

One comment on “Murcielago opens tonight for Jeff the Brotherhood”