It’s a big weekend for shows but, unfortunately, we have to play hooky.

We’ve got a wedding anniversary on Saturday and — try as we might — we’re just not able to coax the missus out to a heavy show for the occasion. Too bad, because the event at Asylum promises to be rad. (Lucky for us, we have a backup plan. We’ll get back to that in a minute.) 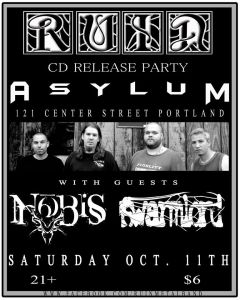 The new LP, “Rites of Passage,” is the band’s third. It was recorded with Kevin Billingslea at Lion’s Maine Studios in Waterboro and released independently.

The album marks a reemergence for the band. A couple years ago, Ruin went through a lineup change after parting ways with their guitarist. As a result, bassist Kevin Whitman assumed the role of guitarist and Todd Bidwell joined to play bass. The personnel changes spurred a below-the-radar creative process as they wrote and recorded “Rites,” according to guitarist/singer Richard Carey.

“Making this album had a covert-op kind of feel to it,” he said. “We stopped playing shows and stopped pushing our name on purpose. We took extra time to refine our sound, and only focused on the writing and recording. We wanted to make the best album possible for our fans and for ourselves. We didn’t change our musical direction really, the difference in this album is that we put so much more time into our creative process.”

For Saturday’s show, we’re handing the reigns over to Portland photographer and man-about-town Michael Batchelder. We’re beyond thrilled that Batchelder will be Post Mortem’s very first guest photographer. Be sure to check out his work on Sunday. 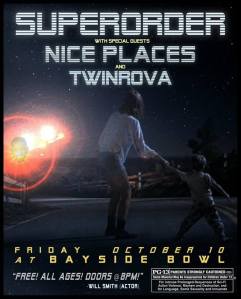 Tonight, be sure to check out Superorder at Bayside Bowl, where they play a free show with Nice Places and relative newcomers Twinrova, which features members of Superorder and Capture the Sun.

We’ve caught Superorder a few times and highly recommend the experience: the lasers, black lights, face paint and epic weirdness will undoubtedly cause flashbacks to the time you ate that thing.